Spike Jonze continues to reel us in with his recent spate of emotional movies. This time it’s sci-fi romantic drama Her – here’s why it’s great…

Let’s take a look at the film in a nutshell: Man reluctantly divorces wife. Man is sad. Man mopes around and broods intensely. Man installs new state-of-the-art Operating System onto his computer. Man falls in love with computer, resulting in a vague moral ending.

A strangely satirical comment on modern day society, don’t you think? The funny thing is that the events in the film actually have quite a high chance of happening in the not-so-distant future. Instead of walking around with their heads down tip-tapping on a smart phone, citizens of 2025 LA all speak to their personalized Operating Systems via an ear piece – forever connected to their artificially intelligent best friend…or lover. And, of course, who wouldn’t fall in love with a computer with the voice of Scarlett Johannson?

What’s more is that unlike other, unrealistic portrayals of the future (ahem, you may remember we mentioned Back to the Future II last week), the representation of the near future in Her is very convincing – something that is mainly down to its accurate depiction of fashion and technology.

Clothes in the film are definitely inspired by 70’s fashion – highwaisted corduroys, bright blocks of colour, big knits, open shirts – but with somewhat of a modern twist. Of course this sort of thing, the revamping of previous styles, happens every other decade and so therefore provides an extra sense of reality to the film instead of going «whole hog futuristic». Casey Storm, Jonze’s long-time costume designer rightly pointed out that “We really don’t need to show it’s the future by putting people in crazy-shaped hats or epaulets”. I suppose we can also thank this logic for Joaquin’s questionable retro moustache.

The technology? As I mentioned before, it’s easy to envisage something like this coming to fruition in the next few years. Nowadays we’re all perpetually pawing at our mobile phones, eager to respond to the latest Whatsapp message or vulgar Snapchat image. But what’s the next step? Personalized Samanthas for everyone? Maury Povich «So I’m dating my computer» specials?
And the same goes for the architecture – huge high rises, sculptures and elevated train tracks are not such a far shout from now.

The weepy soundtrack of the film is partially provided by Canadian indie giants Arcade Fire and, as heard in the trailer above, the Yeah Yeah Yeah’s. Front lady of the latter, Karen O, also features on the official soundtrack of Jonze’s 2009 flick Where the Wild Things Are in the form of Karen O and The Kids.

Where the Wild Things Are once again showcases Jonze’s ability to hack into the emotional and nostalgic, with little rascal Max running around an imaginary island accompanied by monsters that seemingly represent parts of himself and his family.
Incidentally, the late author of the much loved children’s book, Maurice Sendak, appears on the list of dedications at the end of Her alongside James Gandolfini, who voiced Carol the monster.

All this emotional stuff isn’t bad for a guy who’s been heavily involved with the Jackass crew from the offset, right?

To conclude, I’ll leave you with a quote from The Guardian:

«[Her] is set in a techno-perfect Los Angeles of the near future, a u-topia with the tiniest hint of dys-. Everything tends to be lit with a dreamy, woozy kind of afternoon sunshine and lens flare, in a place where a contented, diverse population mills happily around, rather like a TV ad spot for Apple computers directed by Douglas Coupland.» 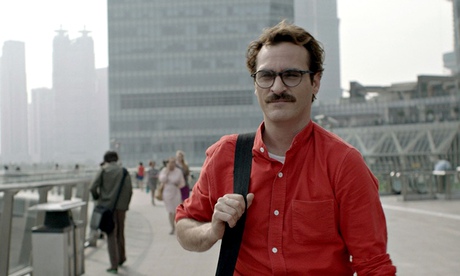 Jonze picked up an Oscar last night for Best Screenplay in Her. Unfortunately Joaquin Phoenix wasn’t nominated for Best Actor, an award which was picked up by Matthew McConaughey leaving poor old Leonardo DiCaprio to clap along like a good sport once again.

Are you reading from Spain? I’m a firm believer that films should be watched in original version because there are so many instances when little things or mannerisms are lost through the use of dubbing. VO (versión original) films are also great for learners of a foreign language and, contrary to popular belief, the subtitles don’t «put you off» or take away from the film.
So, where can you watch Her and other films in VO in Valencia?